Across the country, young activists take different approaches in the name of justice for George Floyd

On Friday, Kiazolu and nine other members of BLM Greater New York traveled to Minneapolis to "stand in solidarity with the people of Minnesota," Kiazolu told CNN.

From Friday to Sunday, she and her peers protested on the ground in Minneapolis. They joined activists across the nation, who took to the streets in honor of Floyd and other black lives lost. Tatiana Washington of Milwaukee took her work to a virtual space while Thandiwe Abdullah spoke out in Los Angeles.

There's no one blueprint for demonstrating in the name of Black Lives Matter. Kiazolu says the decentralization of the movement is part of its beauty.

Since the inception of the Black Lives Matter movement in 2014, activists around the country have adopted their own techniques and means for demonstrating in response to the events in their own communities.

"Black Lives Matter is not an isolated cause," Abdullah said. Abdullah, whose mother is also an activist, has been advocating for black lives as long as she can remember. "The liberation of black people is about the liberation of all oppressed people: other people of color, poor folks, immigrants, queer folks and trans folks. I think that message gets lost oftentimes."

These demonstrations fall against a backdrop of the coronavirus pandemic, throughout which African Americans have died at disproportionately higher rates than all other racial groups.

"I don't have the luxury and privilege as a black woman to sit in my house and do nothing. Whether I sit at home or go outside, I can be killed because of the color of my skin," Kiazolu said. "That's why, in the middle of a global pandemic, black organizers are forced to go outside."

While Kiazolu and her team were active in Minneapolis last weekend, she told CNN that they did not take part in the violence, looting or vandalism. State and local officials have noted that many of the protesters in the city over the weekend were from out of town, leading to a shift away from peaceful demonstrations.

"I didn't go down there to do that," Kiazolu said.

Still, she and her team faced what she called a "chaotic" encounter with the police on Friday night.

The group was walking to find their car after 16 hours of protesting when they heard store alarms sounding and people screaming, and saw a line of police about a block away.

"We heard the officers screaming, but we couldn't hear what they were saying," Kiazolu said. Eventually, they made out the words, "Stop or we'll shoot," at which point the group stopped in their tracks.

"If we had taken half a step, if we didn't hear that by the time we got a little bit closer, we would have been the next hashtag," she said.

After spending three days in Minneapolis, Kiazolu and her team noticed that things were escalating in New York City.

"We were looking on the phone like, 'Whoa, whoa, whoa, people are burning stuff in Brooklyn,' " Kiazolu said. "We rendered our assistance on the ground in Minnesota, but we had to come back home."

On Sunday night, Kiazolu and her team traveled back to New York and headed to their own community's nonviolent protest, The Freedom March NYC.

Twice within three days, the group went straight from an airport to a protest.

Activism off the streets

In Milwaukee, Tatiana Washington found that many black youths, especially those who are unable to protest on the ground, lacked a space to come together and grieve.

Last Thursday, the 19-year-old immunocompromised gun violence prevention activist tweeted out a call: "ALL BLACK YOUTH: Message me if you wanna join a Zoom with other Black youth. Let's grieve and talk next steps. Tomorrow at 5PM CST!!!!"

The next day, about 30 people, some of whom Washington didn't know, joined the call from across the country, including young people from Minneapolis, Washington, DC, California and Texas.

The call convened people of "all different backgrounds," Washington said. "Not everyone is involved in activism or organizing, not everyone will want to organize a rally, but I see a lot of black youth are really angry with what's happening and they want to take action. ... Collectively, I'm seeing a lot of my peers, a lot of my friends, just heartbroken right now."

Washington said she plans to have more calls soon.

She said she is not any less angry about the death of George Floyd, but she said she has a different set of "abilities" than those who protest on the ground.

"I am proud because I see black youth stepping up. I do feel like this is a time when things are actually going to change. I feel this movement changing. It's bittersweet, I would say," she added.

No blueprint for demonstrations

At 10 years old, Thandiwe Abdullah went to Ferguson, Missouri, with her mother, Melina Abdullah, a lifelong activist and one of the co-founders of Black Lives Matter LA.

"I really don't remember a time when I wasn't involved in this work," Abdullah told CNN. 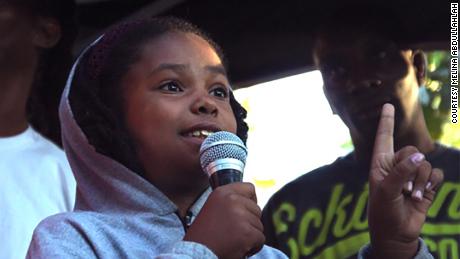 Now 16, the young activist protested in Los Angeles over the weekend, and said Saturday's demonstration resembled those she had witnessed in Ferguson in 2014.

She said of her days in Ferguson: "Especially being so young, I didn't really make sense of what was going on at the time. But now I'm seeing a lot of similarities between what was happening there and what's going on now."

Los Angeles harbors a strong history of protests against the police, including the 1992 riots. The events stemmed from the acquittal of four white police officers who had been filmed beating Rodney King, a black motorist -- one of the first times a violent interaction between the police and a black citizen had been caught on tape.

On Friday, Abdullah was part of a group of protestors who shut down a Los Angeles freeway. But that action was small compared with the one that took place on Saturday, when according to Abdullah, protestors "disrupted" life in the Fairfax District, a predominately white neighborhood.

"It was by design for us to meet in Pan Pacific Park, a rich, predominately white area," she said. "The folks who live there, they don't have to face the reality that black folks face every day. ... We chose this place to disrupt that and bring this fight to them."

The protesters started in Pan Pacific Park and marched to Beverly Hills, specifically targeting The Grove, a popular shopping center.

While the demonstration started peacefully, it did not end that way.

Abdullah said people in MAGA hats tried to agitate the protestors and egg on violence, but she recognizes that there will always be those who try to intervene.

"We have to remain on brand," she said. "It's so clear what the message is. There's one message, and the fact that we're letting a small demographic of people who are coming in and escalating things take over this whole movement is not our fault."

Abdullah said she believed protesters who attacked buildings serve a purpose. "I'm not trying to say that attacking buildings is the best response," she said, "but people had a purpose when they did it. ... People have a right to their rage."

"It says a lot about how much people value buildings and things and materialism more than they value black lives," she said.

Atalanta does not lose 15 matches in a row – 13 wins and 2 draws
Lorient threw one newcomer off a plane and sent another under the water-all for the sake of presentations on social networks
Pasalic scored a hat-trick in the match against Brescia. Atalanta smashes the opponent 6:1
Rummenigge on Ribery: Hennessy was like a second father to him, and I was like a second mother
Giroud has scored 6 goals in his last 10 Premier League games – the same number as in 51 games before
Liverpool leads its graduates through life. You'll Never Walk Alone in action
Ararat-Armenia won the Armenian championship for the second season in a row
Source https://edition.cnn.com/2020/06/03/politics/young-activists-george-floyd/index.html?utm_source=feedburner&utm_medium=feed&utm_campaign=Feed%3A+rss%2Fcnn_latest+%28RSS%3A+CNN+-+Most+Recent%29

Woman pleads not guilty to charges in Texas soldier's death