DARWIN, Australia — The mining giant Rio Tinto has been accused of environmental and human rights violations in a complaint that says an abandoned mine is leaking waste and poisoning rivers on the island of Bougainville.

The claim, signed by 156 residents of the autonomous region in Papua New Guinea, is seeking an investigation by the Australian government into what it calls Rio Tinto’s failure to clean up millions of tons of waste at the former Panguna copper and gold mine.

It said the waste was making the island’s drinking water unsafe and causing health problems, including skin conditions and upper respiratory and gastrointestinal illness, particularly in children. The mine’s abandoned piles of tailings have also caused rivers to flood, destroying sacred sites.

“We live with the impacts of Panguna every day,” Theonila Roka Matbob, a traditional landowner from Makosi Village and a member of the Bougainville Parliament, said in a statement released by the Human Rights Law Center, which lodged the claim.

“Our rivers are poisoned with copper, our homes get filled with dust from the tailings mounds, our kids get sick from the pollution,” Ms. Matbob added. “These are not problems we can fix with our bare hands. We urgently need Rio Tinto to do what’s right and deal with the disaster they have left behind.”

The rights group filed the claim with the Australian National Contact Point, a nonjudiciary body that has the power to investigate complaints made against Australian companies operating overseas.

The mining industry has dominated Papua New Guinea’s economy for decades, with companies extracting minerals including gold, copper, silver and nickel. Panguna was among the largest copper mines in the world, but it was closed in 1989, after protests by workers escalated into a brutal civil conflict.

In 2000, residents of Bougainville filed suit against Rio Tinto in U.S. federal court, arguing that the company had mistreated Black workers, had been complicit in war crimes and had damaged the environment. But the case was dismissed in 2013.

Rio Tinto also recently suffered scalding public criticism in Australia over its stewardship of the environment. Three executives, including the chief executive, were forced to step down this month over its destruction of prehistoric rock shelters in the Juukan Gorge in Western Australia, which are sacred to two Aboriginal groups.

The move was a turning point for a company that had long operated without consequence, Indigenous rights activists said, and it marked a milestone in Australia’s resources history.

The complaint over the poisoning of Bougainville’s rivers also calls on Rio Tinto to re-engage with residents to address the abandoned site. The company ran the mine for 45 years and divested it in 2016, leaving thousands of people who live downstream in the Jaba-Kawerong River valley to deal with the consequences.

“The communities are living in a highly unstable dangerous environment,” said Keren Adams, the legal director of the Human Rights Law Center. 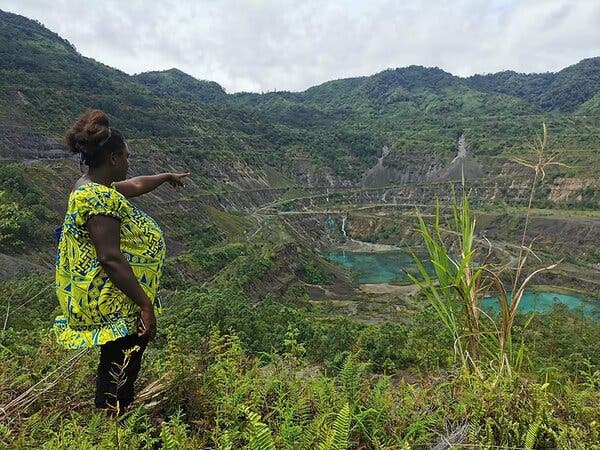 “We live with the impacts of Panguna every day,” said Theonila Roka Matbob, a member of the Bougainville Parliament, pictured at the closed Panguna mine pit last year.Credit...Human Rights Law Center, via Agence France-Presse — Getty Images

A large number of nearby communities, Ms. Adams added, “don’t have access to safe, clean nearby water sources.” She said Rio Tinto desperately needed to conduct a risk assessment, and to contribute substantially to an independent fund to assist in the cleanup and managing of ongoing health problems in the community.

In a statement released on Tuesday, Rio Tinto said it was “aware of the deterioration of mining infrastructure at the site and surrounding areas, and claims of resulting adverse environmental and social, including human rights, impacts.”

The company said it was ready to have discussions with the communities that had filed the complaint, along with their representatives.

Ms. Adams, the lawyer, said that while she was encouraged by Rio Tinto’s statement, there was still a long way to go before the vast and sometimes fatal problems caused by mining’s legacy on the island could be addressed.

“We’ll have to wait and see what meaningful action they propose,” she said.

Zidane on ISCO's words: it's ambition. Everyone wants to play
Bartomeu about VAR: In the match against Real Madrid, a non-existent penalty was awarded. We need fair football
Ian Wright: it's a Pity Ozil isn't playing, but Arteta's tenacity is admired
Josep Bartomeu: it was Important to start a new era for Barca with Messi. The Interests of the club are above all
Spider-man is a Barcelona fan. Tom Holland photographed in a Catalan t-shirt
Neymar made the world team of 5 players. There is no goalkeeper in it
Zidane on Barca's reaction after Classico: Real Madrid are focused on their goals. I don't mind talking
Source https://www.nytimes.com/2020/09/30/world/australia/rio-tinto-abandoned-mine-poison-rivers.html

The Squad Is Expanding, and Jemele Hill Loves to See It

All About Moses Ingram, Jolene from ‘The Queen’s Gambit’ Cast

Biden floats rotating Supreme Court justices if he is elected

Top 3 Strategies to Sell Without 'Selling'

Tied to the tracks

Stream It Or Skip It: ‘The Undoing’ On HBO, Where A Murder Rocks Nicole Kidman And Hugh Grant’s Idyllic Marriage

Silverado Fire in Southern California doubles to 4,000 acres in matter of hours, leading thousands to evacuate

Apple's Powerbeats3 Bluetooth headphones may be old, but they still rock

This is hands down the worst part of Jets-Giants agony

Why it's time to retire 'Election Day'

Jeannette Williams-Parker, Nurse in a Virus Hot Spot, Dies at 48

Why Are Democrats Backing a House Candidate With Reportedly Shady Foreign Ties?

Gianno Caldwell: Hidden Trump voters and the mystery of 2020

Pregnant Sadie Robertson reveals she was hospitalized with coronavirus

Rallies Are the Core of Trump’s Campaign, and a Font of Lies and Misinformation

200-pound tortoise is back home after escaping Alabama pen

Mike McCarthy gets vote of confidence amid growing Cowboys chaos

American jailed for attempt to overthrow Vietnam government back in California

'Time,' a kiss, and resilience as resistance: Why the Amazon documentary is a vessel for change

Questlove’s quest: To find woman who bought him a turntable

Rep. Cedric Richmond denies Ice Cube was told to hold off demands until after election: ‘That did not happen’

WHO Director-General Warns Against Politicization of COVID-19 Pandemic

Nurses Are at High Risk for Covid Among Health Workers, C.D.C. Says

‘We Don’t Have to Put Up With This’: A Candid Conversation About Bodies

Commentary: John Brown is the hero we need right now. And 'The Good Lord Bird' delivers

Showcase all of your pictures in this sleek digital frame

Broncos: we have the right guys to straighten things out

Eye-opening tips to know about frames when buying glasses

Georgia, Once Reliably Red, Is Suddenly a Battleground. What Happened?

The pivotal post-Election Day dates you need to know

Clarence Thomas set to swear in Barrett at White House

No. 10 Florida, Mullen return to work after COVID outbreak

Pregnant Sadie Robertson Is Recovering After Hospitalization for Coronavirus

Water on Moon's surface could be used for drinking; NASA makes breakthrough discovery

Many nurses were hospitalized with Covid early in the pandemic

Jared Kushner says Black Americans must "want to be successful"

Columbus, Ohio, to vote on paying $475,000 to officer who says police force discriminates against its own

Managing your retirement account and taxes during economic uncertainty

They Work In Several Nursing Homes To Eke Out A Living, And That Spreads The Virus

CPS reports most weekly COVID-19 cases since pandemic began, but the numbers remain low. Can they stay that way if schools reopen next quarter?