President Trump shied away Wednesday from issuing domestic travel restrictions or a national lockdown to slow the spread of the coronavirus pandemic that, in a best-case scenario, is expected to kill between 100,000 and 240,000 Americans.

Asked at a White House briefing if he was considering limiting domestic air travel, Trump said he was thinking about it, a phrase he frequently applies to subjects he wishes to avoid discussing.

“We’re thinking about doing that, but at the same time we just, to start these airlines and to start this whole thing over again is very tough, John [Roberts, Fox News reporter]. It’s very tough,” Trump said. “And you have them going, in some cases, from hot spot to hot spot, if you noticed. Usually they’re hot spot to hot spot, very few flights, New York to Miami. But we’re certainly looking at it, but once you do that, you really are clamping down an industry that is desperately needed.”

The president did not rule out instituting further travel bans, saying it was “a calculation that we’re looking at right now and we’re looking at it very strongly,” but he began his briefing indicating that the peak of the outbreak in the U.S. might soon be at hand.

“We’re going to have a couple of weeks starting pretty much now, but especially a few days from now, that are going to be horrific,” Trump said.

Asked why he had not issued a nationwide stay-at-home order to slow transmission of the virus, Trump pointed to Florida Gov. Ron DeSantis’s order on Wednesday for state residents there to shelter in place.

DeSantis has come under fire by critics who accuse him of being slow to close beaches and order social distancing directives while the number of COVID-19 cases rose to nearly 8,000 in the state. There have so far been 101 deaths there from the disease. 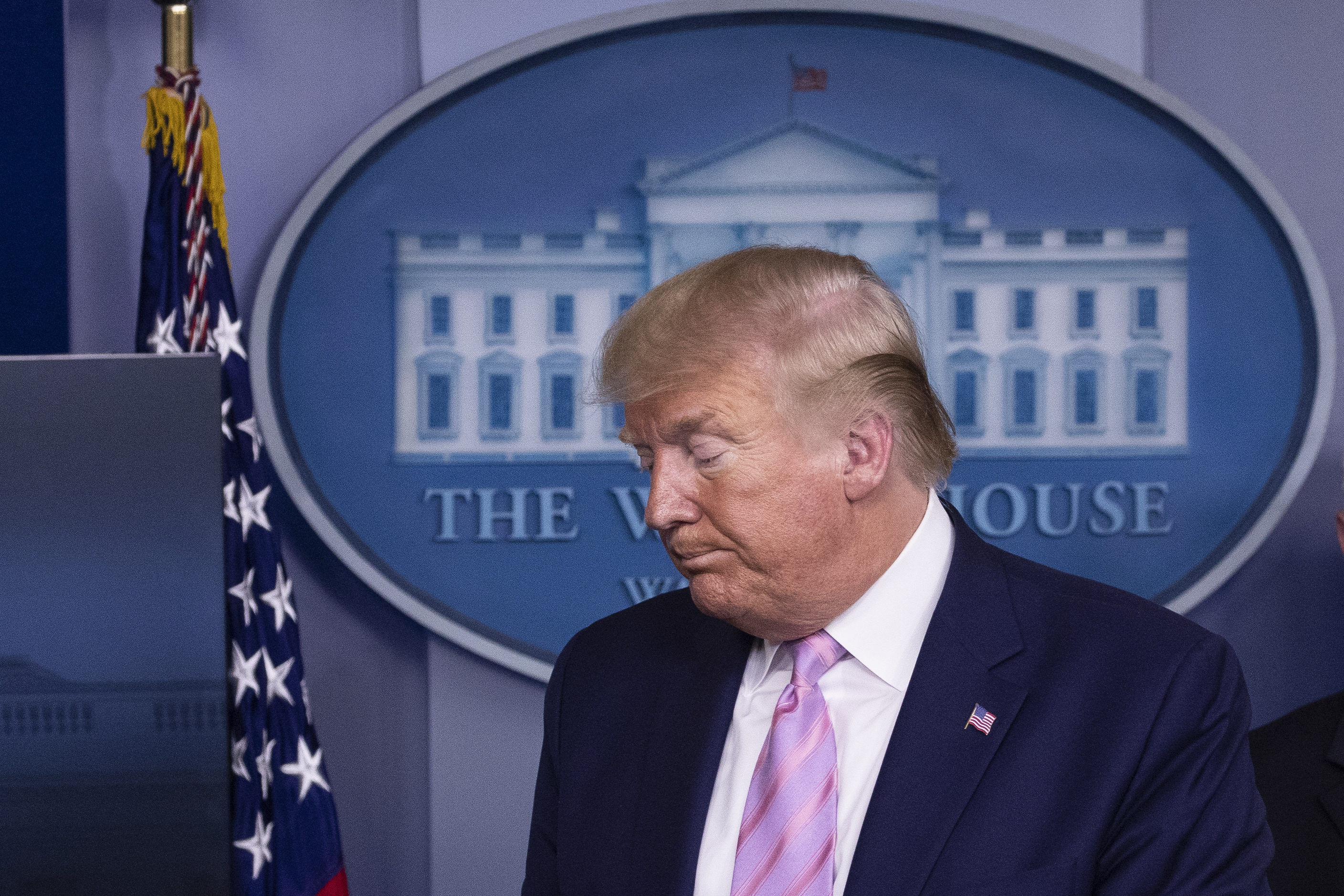 But Trump continued to make his case that the ultimate call about whether to limit freedom of movement was up to the states.

“You have to give a little bit of flexibility in the Midwest or Alaska, for example, doesn’t have a problem. It’s hard to say, ‘close it down,’” Trump said.

In fact, Alaska Gov. Mike Dunleavy put a stay-at-home order in place on March 28. Alaska has 133 confirmed cases of COVID-19.

Over the past few days, Trump, who had said he hoped to have the country back to normal by Easter Sunday (April 12), has reversed course and extended the government’s voluntary social distancing recommendations through the end of the month.

He said he had come to realize that COVID-19 is different than the seasonal flu.

“It is so contagious,” Trump said when asked what had stopped likening the coronavirus to flu. “Nobody has ever seen anything like this where large groups of people all of a sudden, just by being in the presence of somebody, have it. The flu has never been like that.”

The president also said that he had been approached by health professionals who recommended a nationwide lockdown to stem infections.

Dr. Anthony Fauci, the leading medical expert on the coronavirus task force, offered a more sobering assessment of when social distancing measures might be eased.

“I think if we get to the part of the curve that Dr. Birx showed yesterday, when it goes down to essentially no new cases, no deaths at a period of time, I think it makes sense that you’re going to have to relax social distancing,” Fauci said.

As of Wednesday evening, over 213,000 Americans had tested positive for COVID-19 and nearly 5,000 had died from it. Roughly 20 states have fewer than 1,000 confirmed cases of the disease, but that list grows shorter with nearly every passing day.

Click here for the latest coronavirus news and updates. According to experts, people over 60 and those who are immunocompromised continue to be the most at risk. If you have questions, please reference the CDC and WHO’s resource guides.

The Leipzig goalkeeper gave out a perfect goal pass to Werner. With one pass, I cut off all my opponents and brought them out one on one
Chelsea want to acquire Werner, promising the player more playing time compared to Liverpool
Dennis Bergkamp: Henri killed the intrigue in matches. He is the best player in this role that I have ever seen
President of Las Palmas: Our stadium will be the only one in the top Championships with fans in the stands from June 13
Vitinho, Gabigol and other Flamengo players spoke out about the death of George Floyd: black Lives matter
PSG were in contact with desta's entourage. The Ajax defender is Interested in Barcelona and Bayern
The Werner scored his 25th goal in the Bundesliga. Only Lewandowski and Immobile have scored more in the top 5 European leagues
Source https://www.aol.com/article/news/2020/04/01/a-national-lockdown-to-stop-coronavirus-trump-is-thinking-about-doing-that/23967681/

Mounds of bricks, bottles found in Baltimore ahead of expected George Floyd unrest

The sixth mass extinction is happening faster than expected. Scientists say it's our fault

Hungry for a deal: Beverly Hills home gets 18 offers within 24-hour period

Trump to deliver statement as even his allies grow frustrated

Column: Trump's attack on Twitter is a complete fake

Co-owners of Minneapolis restaurant torched by rioters: 'We have invested our whole lives into it'

Protesters tried to remove a Confederate monument in Birmingham. The mayor told them he would finish the job

From an L.A. riots doc to a reality TV respite: 5 shows to watch this week

'It's Like A Nightmare': Options Dwindle For Renters Facing Economic Distress

Cities are being destroyed. California clearly isn't as enlightened about race as we think

A Minneapolis school asked for groceries to help the families in looted communities. They received thousands.

Neighbors join man afraid to walk alone near his own home

What time are the curfews in and around L.A. tonight?

‘All of It Is Toxic’: Misinformation About Protests Surges Online

Why it’s not enough to admit when you’re being racist: “Challenge those racist ideas”

Staggered call times. No more buffet-style food. How sets might change after coronavirus

Clever dog helps his owner take out the trash every day

Former NYPD commissioner says NYC curfew comes 'way too late': 'Should have been done a couple of days ago'

Coronavirus waivers required at many reopened gyms, salons and offices

‘You Can Only Demean People So Much.’ Minneapolis Activists Aren’t Surprised a National Movement Started There

Paytm Mall moves operations from Noida to Bengaluru, to hire 300

At Focal Point Of D.C. Protests, A Momentary Sense Of Calm After Media Captures A Night Of Unrest

Inside a Huge George Floyd Protest in Brooklyn

In the Midst of Nationwide Tension, George Floyd’s Brother Pleads for Calm and Justice

As America awaits another night of protests and curfews, families of those killed say no more violence

Small businesses across America were struggling to survive. Now they face a new threat

Coronavirus pandemic has caused shortage for this antidepressant

Everyone Is Mad at Virgil Abloh Over the George Floyd Protests

White supremacy takes so much already, don’t let it take your grief too

Midtown Manhattan braces for another night of George Floyd protests

McConnell Addresses Violent Demonstrations: ‘You Do Not Advance Justice by Inflicting Injustice’

Clemson WR Ross out for the year due to spinal condition

Gene & Georgetti takes a hit from looters, but owner says she understands why ‘there is anger right now’

Tracee Ellis Ross and Tyler, the Creator on Falling and Getting Back Up

Gregg Popovich unleashes fiery statement on Trump: 'What we have is a fool in place of a president'