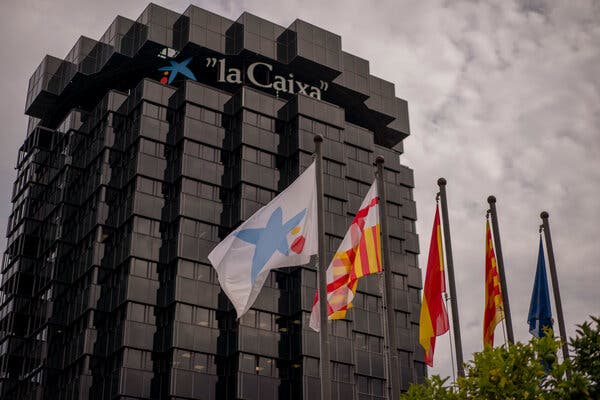 CaixaBank, based in Barcelona, agreed to merge with Bankia, the institution that was at the heart of Spain’s financial crisis and 2012 banking bailout.Credit...Emilio Morenatti/Associated Press

CaixaBank and Bankia agreed late Thursday to merge in a deal that would form Spain’s largest bank and end the government’s majority control over Bankia, the institution that was at the heart of Spain’s financial crisis and 2012 banking bailout.

The all-share agreement was presented as a merger, but CaixaBank, which is based in Barcelona, will account for about two-thirds of the new bank’s combined assets, worth 665 billion euros, or $785 billion. The combined institution, with an expected 20 million customers, will keep the CaixaBank name.

The transaction comes after both banks have reported sharp drops in first-half earnings, at a time of record-low interest rates and as the coronavirus pandemic has plunged Spain into one of the deepest recessions in Europe.

Many analysts expect the continued pressure on banks’ margins to force further consolidation in the sector. A merger between CaixaBank and Bankia “could revive moves by other banks to gain scale or strengthen their franchises or business models to remain competitive,” Fitch Ratings said in a note to investors earlier this month.

Bankia was formed as a seven-way merger intended to consolidate savings banks, known as cajas in Spain, which were crippled by bad loans, a result of the bursting of the country’s construction bubble after the onset of the world financial crisis in 2008.

But instead of shoring up Spain’s financial sector, Bankia ended up posting the largest banking loss in the country’s history and requiring about €22 billion in rescue funding, as part of a European banking bailout that the Spanish government was forced to negotiate in 2012. As a result, the government also took over Bankia, which was then slimmed down to return it to profit. 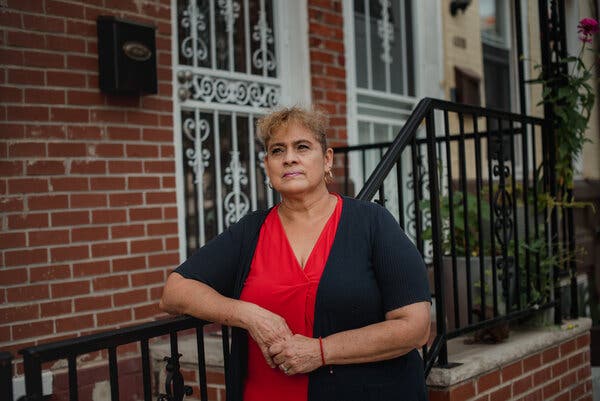 “There are a lot of people who don’t want to disinfect their own homes,” said Maria Del Carmen, “so they call a housekeeper.”Credit...Hannah Yoon for The New York Times

The pandemic has had devastating consequences for a wide variety of occupations, but housekeepers have been among the hardest hit.

Seventy-two percent of them reported that they had lost all of their clients by the first week of April, according to a survey by the National Domestic Workers Alliance. The fortunate had employers who continued to pay them. The unlucky called or texted their employers and heard nothing back. They weren’t laid off so much as ghosted, en masse.

“We plateaued at about 40 percent employment in our surveys of members,” said Ai-jen Poo, executive director of the alliance. “And because most of these people are undocumented, they have not received any kind of government relief. We’re talking about a full-blown humanitarian crisis, a Depression-level situation for this work force.”

The pandemic has laid bare not just the vulnerability of housekeepers to economic shocks but their total lack of leverage. Several workers said they had clients who would not let anyone clean who has had Covid-19; others know clients who will hire only Covid survivors, on the theory that after their recovery, they pose no health risk. Housekeepers are often given strict instructions about how they can commute, and are quizzed about whether and how much they interact with others. But they have no idea whether their employers are taking similar precautions. Nor, in many cases, are they accorded the simple decencies that are part of formal employment.

“It would be nice to have at least two days’ notice when someone cancels on you, either to let you know or compensate you for your time,” said Magdalena Zylinska, a housekeeper in Chicago who helped lobby for a Domestic Workers’ Rights bill that passed in Illinois in 2017. “I think a lot of people don’t realize that if I don’t work, I don’t get paid and I still have to buy food, pay bills, utilities.” 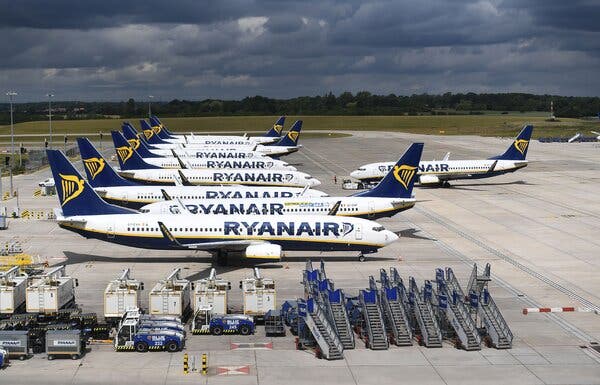 Ryanair on Friday announced a 20 percent cut in capacity for October.Credit...Andy Rain/EPA, via Shutterstock

Hans-Dieter flick: I Hope Alaba will sign a contract with Bayern. Our club is one of the best in the world
Diego Maradona: Messi gave Barca everything, brought them to the top. He was not treated the way he deserved
Federico Chiesa: I hope to leave my mark in Juve. We will achieve great results
The Coach Of Benfica: I don't want us to look like the current Barcelona, it has nothing
Guardiola on returning to Barca: I'm happy at Manchester City. I hope to stay here
Fabinho will not play with West ham due to injury
Ronald Koeman: Maradona was the best in his time. Now the best Messi
Source https://www.nytimes.com/live/2020/09/18/business/stock-market-today-coronavirus

With 72 Hours to Go, a Last Sprint to Drive Voter Turnout

This entrepreneur says he's making diamonds 'from the sky'

Trump’s winning hand: How the president can pull off another upset

Did President Trump Keep His First-Term Promises? Let’s Look at 5 of Them

How a Michelin-starred restaurant became a pandemic takeout joint

Ziyech, Werner score as Chelsea eases to 3-0 win at Burnley

225K couples with pandemic-postponed weddings owe $3.7B in loans

Orthodox priest shot at church in France, attacker at large

Priest shot at church in France

Jets have nothing to lose against Chiefs — so play like it

Noose displayed at Missouri poll covered up amid complaints

Newt Gingrich: A 2020 Election Fable -- The Bunny Rabbit, the Bear, and the Bees

On the Intimate Positions, Ariana Grande Is Fully in Her Feelings

Beyond James Bond, Sean Connery was the ultimate movie star

Muslims In Several Countries Protest Cartoons After Violence In France