Jeff Van Drew’s defection from the Democratic Party began with a vote against impeaching President Trump and ended with a handshake in the Oval Office.

With his pledge of “undying support” for Mr. Trump, the freshman congressman from New Jersey unleashed the full fury of his former party and earned a quick embrace from the Republican president, who promptly held a rally for Mr. Van Drew in South Jersey, declaring it “Trump country.”

The apostasy set in motion a surprisingly toxic race that has become a moral crusade by Democrats thirsty for political payback in a state where they outnumber Republicans by 1 million voters.

“We’ve got to make an example out of this guy — kick his butt,” said Michael Suleiman, the Democratic Party chairman in Atlantic County, who helped to send Mr. Van Drew to Congress in 2018 during the so-called blue wave.

But Tuesday’s primary race among Democrats vying to run against Mr. Van Drew has split largely along the political fault lines that have divided the party.

On one side is Gov. Philip D. Murphy, who offered a late endorsement to the candidate with a celebrity surname: Amy Kennedy, a mental health advocate and former history teacher married to Patrick J. Kennedy, a former congressman and a son of Senator Edward M. Kennedy.

On the other are two of Mr. Murphy’s political rivals, George E. Norcross III, a South Jersey power broker, and Stephen M. Sweeney, the Senate president, who are supporting Brigid Callahan Harrison, a professor of political science and law. 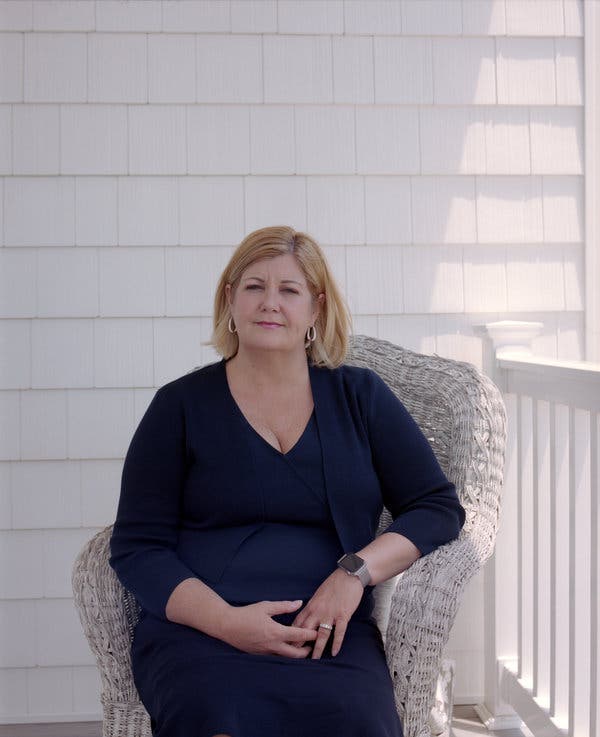 “People need help. They need solutions,” said Brigid Callahan Harrison. “They need someone who has thought about what’s needed for more than a hot minute.” Credit...Hannah Price for The New York Times

That lineup was the only predictable element in the race.

Both of New Jersey’s United States senators are backing Dr. Harrison, staking ground opposite Mr. Murphy, an ally and fellow Democrat, as are many labor organizations.

Ms. Kennedy has the support of public employee unions that often align with Mr. Murphy as well as progressive groups that oppose Mr. Norcross and are working to undermine the power that county leaders in New Jersey have to anoint candidates.

With help from Mr. Norcross, Dr. Harrison notched the support of six of the district’s eight county chairs, but Ms. Kennedy won the coveted Democratic Party line in Atlantic County, where more than one third of the district’s voters live.

The coronavirus has upended the contest since it has precluded most traditional campaigning.

Instead, the race has been marked by a volley of competing news releases, Zoom fund-raisers and an online-only debate broadcast on YouTube. (The three-way debate drew a total of 256 viewers to its live airing.)

The election itself was postponed by a month, to the Tuesday after a holiday weekend. And voting is being conducted almost entirely with mail-in ballots — the first wide-scale test of a method that was used in May but tainted by allegations of fraud.

Mail-in ballots must be postmarked or delivered in person by Election Day, and the race, if close, may take more than a week to decide.

“There’s almost, like, no anchor to grab onto,” said Professor Micah Rasmussen, who teaches politics at Rider University and was former Gov. James McGreevey’s press secretary. “There’s no sense of normalcy.”

Other closely watched races on Tuesday include a Republican primary between Kate Gibbs and David Richter, who had planned to run against Mr. Van Drew but switched districts after the defection. The winner will compete against Representative Andy Kim, a freshman Democrat in a vulnerable South Jersey district.

“I really think that people are just looking around and asking: ‘Why is everything so screwed up?’” said Hector Oseguera, a 32-year-old lawyer running in the Democratic primary against Mr. Sires, who has been in Congress since 2006. “And they start to say maybe the people who have been in charge for so long haven’t been doing such a good job.”

A third candidate in the running to oppose Mr. Van Drew — Will Cunningham, 34, a lawyer and former investigator for the House Committee on Oversight and Reform — makes a similar argument.

“We were always one paycheck away from falling through the cracks,” Will Cunningham said of his childhood. “And we did fall into cracks.” Credit...Hannah Price for The New York Times

It is his second campaign against Mr. Van Drew: Mr. Cunningham drew 16.8 percent of the vote in 2018. Still, the race is widely viewed as a competitive two-person contest between Dr. Harrison and Ms. Kennedy.

Senator Cory Booker, who is running for re-election, filmed a TV ad for Dr. Harrison and is bracketing himself with her on the ballot.

Ms. Kennedy was endorsed last week by Steny H. Hoyer, the majority leader of the House of Representatives. “She is the best candidate to beat Jeff Van Drew and turn this seat blue again,” Mr. Hoyer said in a statement.

What debate there has been about issues has focused on infrastructure and economic needs along the Jersey Shore, health care reform and marijuana legalization. The district stretches from Atlantic City west to the Pennsylvania border.

Ms. Kennedy, a mother of five, has emphasized her experience as a teacher and her role advocating for mental health and addiction reform as the education director of the Kennedy Forum, which was founded by her husband.

If Ms. Kennedy wins the primary, she will be on the ballot in November alongside a voter referendum question about whether to legalize marijuana in New Jersey, a proposal that Mr. Murphy has championed but that she does not support.

Mr. Kennedy, who has spoken frequently about his struggle with addiction, is an ardent opponent of legalized marijuana.

But that has not stopped observers from noting the policy dissonance.

“It’s concerning for any candidate to be ambivalent on legalization, especially any candidate who is purporting to be a progressive,” said Amol Sinha, executive director of the American Civil Liberties Union of New Jersey, which has assembled a broad coalition of groups pressing to legalize marijuana.

Both candidates have turned repeatedly to negative campaign messaging involving fund-raising, political alliances and the role of super PACs.

Dr. Harrison has highlighted Ms. Kennedy’s embrace of Craig Callaway, a former Atlantic City council president who served 42 months in prison on a bribery charge and who is known for leading aggressive vote-by-mail operations.

She has also questioned Ms. Kennedy’s campaign contributions from officials with Wellpath, a for-profit provider of health care to correctional facilities that appointed Mr. Kennedy to its board in February.

Ms. Kennedy’s campaign has focused on Dr. Harrison’s alliance with Mr. Norcross, who cleared a path for her to run on the Democratic Party line in most of the district’s counties — much as he did for Mr. Van Drew in 2018.

Advertising mailers sent to voters trumpet an opinion essay written in 2011 by Dr. Harrison that encouraged former Gov. Chris Christie, a Republican who was close to Mr. Norcross, to run for president.

Tuesday’s elections also are being viewed as a referendum on the vote-by-mail process, which is expected to lead to increased voter participation but has been marred by problems.

Some voters got the wrong ballots; other ballots never reached voters. A glitch involving a bar code on the envelope caused some ballots to be returned in the mail to voters.

“These primary elections are going to have an asterisk next to them,” Mr. Sweeney, the Senate president, said last week.

A May special election for Paterson City Council, conducted using mail voting at the height of the pandemic, led the attorney general to charge four men with ballot fraud. Mr. Trump, who has been critical of vote-by-mail, referred to the Paterson arrests on Twitter.

“Just like in-person voting, just like early voting, there are risks,” she said. “It’s not an indictment of the policy. It’s just further demonstration that you have to implement it properly.”

Jesus scored for real after Varane's discount on Courtois
Ronaldo has scored in the Champions League playoffs for 14 consecutive seasons
Real burst under the pressure of city in the 9th minute-Varane was left without options and brought a goal
Benzema came in 4th place among the Champions League scorers, scoring the 65th goal. Only Ronaldo, Messi and Raul have more
Sterling scored his 100th goal for Manchester City and 20th in the Champions League
Hazard will be in the starting line-up of Real Madrid for the first time in the Champions League play-offs
Milan is Interested in Torreira. Arsenal are ready to sell the midfielder
Source https://www.nytimes.com/2020/07/06/nyregion/Jeff-van-drew-primary.html