COPENHAGEN — “OK, children, does anyone have a question?” the TV show’s host, Jannik Schow, asked. Only a few in the audience of 11- to 13-year-olds raised their hands. “Remember, you can’t do anything wrong,” he said. “There are no bad questions.”

You can’t blame the children if their thoughts were elsewhere. On a stage before them in a heated studio in Copenhagen stood five adults in bathrobes. There was a brief moment of silence, as faces turned serious. Having discussed it for days before in school, the children knew what was coming next. Mr. Schow gave a little nod, and the adults cast off their robes.

Facing the children, and the cameras, they stood completely naked, like statues, with their hands and arms folded behind their backs.

And so began a recording of the latest episode of an award-winning Danish children’s program, “Ultra Strips Down,” which is shown on Ultra, the on-demand children’s channel of the national broadcaster, DR. The topic today: skin and hair.

The show’s producers say the program is meant as an educational tool to fight body shaming and encourage body positivity. And so first reluctantly, later enthusiastically, the children from the Orestad School in Copenhagen asked the adults questions like: “At what age did you grow hair on the lower part of your body?” “Do you consider removing your tattoos?” “Are you pleased with your private parts?”

One of the adults, Martin, answered that he had never had “negative thoughts” about his private parts. Another adult, also named Martin, admitted that when he was young he had worried about size. “But the relationship with myself has changed over time,” he said.

With serious looks on their faces, the children nodded.

The program is now in its second season, and while perhaps a shock to non-Danes, it is highly popular in Denmark. Recently, however, a leading member of the right-wing Danish People’s Party, Peter Skaarup, said he found “Ultra Strips Down” to be “depraving our children.”

“It is far too early for children” to start with male and female genitalia, he told B.T., a Danish tabloid. At that age, he said, they “already have many things running around in their heads.”

“They have to learn it at the right time,” he added, saying this information should be presented by parents or schools “so that it is not delivered in this vulgar way, as the children’s channel does.”

For the most part, though, Danes have long been comfortable with nudity, at public beaches, for instance.

Mr. Schow, 29, who helped develop the concept of the show after a producer came up with the idea, said the point was also to counter the daily bombardment of young people with images of perfect — unrealistic — bodies. The adults are not actors, but volunteers.

“Perhaps some people are like, ‘Oh, my God, they are combining nakedness and kids,’” Mr. Schow said. “But this has nothing to do with sex, it’s about seeing the body as natural, the way kids do.” 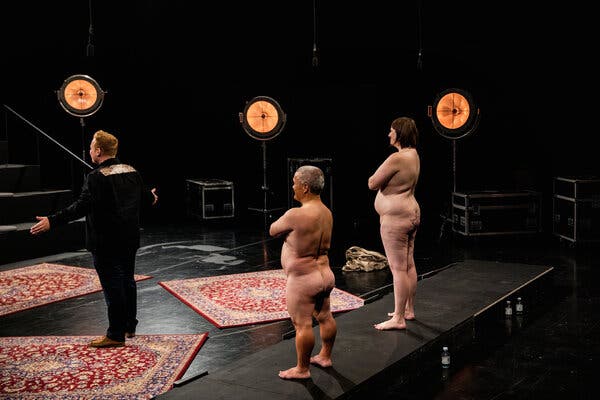 The host of “Ultra Strips Down” is Jannik Schow, left.Credit...Betina Garcia for The New York Times

Many Danes believe children should not be shielded from the realities of life, giving them a lot of unsupervised time to play and explore, even if they might hurt themselves.

“We recognize the significance of a bruise,” said Sofie Münster, a nationally recognized expert in “Nordic Parenting.” “Danish parenting generally favors exposing children rather than shielding them.”

One famous example of how far the Danes take this philosophy was the euthanization and dissection of a giraffe at the Copenhagen Zoo in 2014, where children observed from the front row.

Abroad it was seen by many as a nightmarish spectacle, topped off by the feeding of the carcass to the lions, but in Denmark people shrugged their shoulders. The children in the audience that day had asked “very good questions,” one zoo official told CNN.

“While some may prefer to be overcareful, we may prefer to be under-careful,” Ms. Münster said. “It’s about being free and finding yourself.” If a child falls from a tree and breaks an arm, that might not be “ideal,” she added, but it can serve a larger purpose.

A children’s program featuring naked adults might be taking the Danish approach to the extreme, she admitted. But the Danish way of dealing with easing children’s anxieties over body issues is “to expose them” to naked bodies.

“This is how we educate our children,” she said. “We show them reality as it is.”

Asked during the program on skin and hair why she decided to take part, one of the adults, Ule, 76, said she wanted to show the children that perfect bodies are rare and that what they see on social media is often misleading.

“On Facebook or Instagram, many people are fashion models,” she said. “Us here, we have ordinary bodies. I hope you will understand that normal bodies look like this,” she told the audience, pointing at her naked self.

Preparing to disrobe for “Ultra Strips Down.”Credit...Betina Garcia for The New York Times

During the recording, when one of the Martins told the children that when he was their age, boys and girls used to share the same locker room and showers, Mr. Schow intervened, asking them if they would find that awkward.

“Yessss,” they all responded. “It feels more safe to shower with others of the same gender,” a boy explained on camera.

“Ninety percent of the bodies you see on social media are perfect, but that is not how 90 percent of the world looks,” he said. “We have extra fat, or hair, or pimples. We want to show children from an early age that this is fine.”

In its first season, in 2019, “Ultra Strips Down” won an award for the best children’s program of 2019 at the Danish TV Festival. In the 2020 season, the show, which is produced by the Danish branch of Warner Bros. International Television Production, will offer five new episodes on a variety of topics, each to an audience from mostly different schools.

The children’s safety comes first, the show’s producers said. Parents must consent for children to be on the program; the producers do not show the children and the adults in a single shot; and the children are asked frequently if they feel comfortable.

If a child does become uncomfortable, she or he can join their teacher in the studio. “But we have had over 250 children in our audience,” Mr. Schow said, “and this has never happened.”

Rasmus Engelhardt Gundersen, a graphic designer who is the father of one of the children participating, said, “We had no reservations.”

“The notion that people are different and have different bodies is something we’d like children to experience,” he added.

The recorded episodes, now available in censored clips of the program on YouTube, feature adults with different body types — white, Black, fat, thin, short, tall, old and young. There was John, a person with dwarfism, and Muffe, a man who had small horns implanted under the skin of his bald head.

Robert Lee Harris and Emilie Belle Zander Møller posing for a portrait that will be used to promote an episode of “Ultra Strips Down.”Credit...Betina Garcia for The New York Times

Complete inclusiveness is one of the show’s key objectives, which is why the children were also introduced to Rei, who is transgender, had a vasectomy and testosterone treatment, and who identifies as they/them.

“I’m not a boy, not a girl, I’m a bit of everything,” said Rei, showing a tattoo-covered chest and a shaved head. “I have seven hairs of beard now,” Rei said.

The children wanted to know if Rei had “felt different in school,” what bathroom they use and what swimwear they chose for the beach.

After the show, three children sat cross-legged in the grass outside the TV studio to discuss the experience. At first, they said, they had giggled at the idea of the show. But they had learned something useful, they said.

“It was funny,” said Theodore Knightley, 11. “I liked the advice they gave us.”

Ida Engelhardt Gundersen, 13, said she had been nervous at the start. “I’m not used to seeing volunteers butt naked and asking them questions,” she said. “But we learned about the body and about how other people feel about their bodies.”

Sonya Chakrabarthy Geckler, 11, said that she hadn’t been sure what to expect. But, she said, she “felt more confident about her own body now.”

Christian Vieri: Messi is the Harry Potter of football. When he's done, I'll throw out the TV
Barcelona Vs Juventus: We are glad that you were able to see 🐐 on your field
Rennes coach on one point in 2 games Champions League: this is our debut, we are learning
Simone Inzaghi: a Draw with Brugge can greatly affect the position in the group
Lopetegui on the win over Rennes: Sevilla played almost perfectly
Danilo about 0:2 with Barca: Juventus played organized, but not aggressive enough
Tuchel on neymar's adductor muscle injury: I hope it is not serious
Source https://www.nytimes.com/2020/09/18/world/europe/denmark-children-nudity-sex-education.html