(CNN)Aileen and Jordan Stevens were driving to church Sunday when a car rear-ended their Ford Mustang along Interstate 24 in Tennessee. It was about 9:30 a.m. -- Aileen Stevens was teaching Sunday School that morning at their church in Rutherford County, her family said.

What the couple didn't know at the time was the driver, Dangelo Dorsey, 29, had just committed a series of deadly crimes and an attempted carjacking, authorities said.

He'd opened fire inside a moving vehicle, killing one person and wounding another, then jumped out of the car as traffic slowed down, said David Rausch, director of the Tennessee Bureau of Investigation. In an attempt to carjack another vehicle, Dorsey had allegedly shot a woman in the hand as she tried to drive away. A nearby truck driver suffered a gunshot wound to the face.

But the Stevens were unaware. They pulled over after the accident, and their hourslong nightmare began.

"They stopped, believing it to be a fender-bender, and -- at that point -- Dorsey took them hostage at gunpoint," the Tennessee Bureau of Investigation said.

By the time the ordeal ended about 3:45 p.m., two men --- Jordan Stevens and Darcey Johnson -- were dead. In addition, Aileen Stevens was hospitalized and three other people had been wounded.

They were expecting their first child

Aileen Stevens, 23, a kindergarten teacher, is four months pregnant with their first child -- a daughter. Her brother, Eliezer Rostran, said Jordan Stevens, 23, was working hard at his construction job to provide for his growing family.

The high school sweethearts would go to church together Sundays, then spend time with family afterward. Aileen Stevens' mother attends the same church, and when she didn't see them that morning, she got worried. "That's how she knew something was wrong," Rostran said.

After Dorsey took them hostage, he forced them to drive him to their home in Morrison, the Tennessee Bureau of Investigation said. While there, he allegedly stole two of their guns, swapped vehicles into a Toyota Rav4 and forced them into the car with him.

At some point, he took the couple to a location in the McMinnville area and shot dead Jordan Stevens in front of his wife, authorities said. Then he pushed his body out of the vehicle, forced Aileen Stevens back into the Rav4 and returned to the interstate, the TBI said.

"Authorities later recovered him along Interstate 24 westbound near Exit 111-B," Rausch said in a statement.

Law enforcement from multiple agencies were working to find the SUV, and located it about 3:45 p.m., leading to a pursuit that reached speeds of over 100 mph. It crashed and flipped.

"At that point, Dorsey took his own life. The female hostage was safely recovered," Rausch said.

Couple prayed for the suspect during ordeal, brother says

While in the car with the suspect, the couple prayed for him, said Rostran, who's talked with his sister.

"He was going to release them, he asked, 'would you pray for me?' They prayed, Jordan prayed, and then he said they shouldn't have prayed. Some people don't care about God, but God is good, and is always faithful," Rostran said.

After spending the week in the hospital, Aileen Stevens is home recuperating. She's holding on to her faith, her brother said, and especially the Bible verse Romans 8:28.

The verse says: "And we know that in all things God works for the good of those who love him, who have been called according to his purpose." 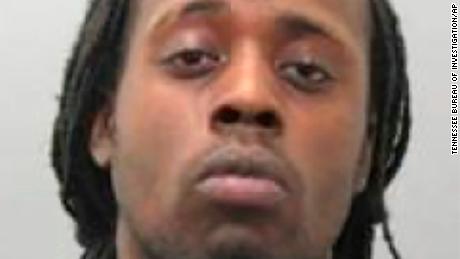 Jordan Stevens will be laid to rest Friday, and their friends have started a GoFundMe account to help raise money to support his wife and child. Their church has also asked for donations.

Aileen Stevens is heartbroken but is trying to stay strong for her baby, her brother said. While the random act of violence changed their lives forever, her brother said the focus is on her healing.

"We want everyone to know that my sister does not hate the actions of the subject. She doesn't hate the family either. She prays for mercy and loving kindness for all families involved," Rostran said.

The TBI has not released any information on the motive. The suspect knew the victims in the initial incident that involved the moving vehicle, TBI spokesman Josh DeVine said, but declined to provide further information. The four people injured in the rampage are expected to recover.

Investigators are working to determine a motive

Dangelo Dorsey was from St. Louis, Missouri, and had no arrest record in Tennessee. While he had an extensive criminal record in his home state, the TBI said, he he had no outstanding warrants at the time of Sunday's rampage.

Authorities are trying to gather information and evidence in what they called a long and complex investigation. They're asking anyone with pictures, video or details on the case to reach out.

"We are working to determine a motive, along with a through understanding of the facts of the case, which -- in turn -- will be submitted to the District Attorney General who requested our involvement for further review," DeVine said.

Morrison is about 80 miles from Nashville.

Mitryushkin on the move to Fortuna: Germany is a country of goalkeepers. I can learn a lot here
Scott Micromini: There is no point in beating PSG if you don't play the same way with Leipzig
Alejandro Gomez: Have Ricica was the coronavirus, and he fell into a depression. Now everything is fine with him
Lyon wants to rent Griezmann and is ready to give Barca Depay for free in the event of a deal (Okdiario)
In the attack against Bayern, Nikolic can use the Hoffenheim technique-luring into the pressure and a long pass to the Alaba zone
Bayern - Loko-Utkin's first match as a commentator: insured Yevgeny Mayorov, set up in the corridor, after the return 0:5 joked about beer
Former Spartak goalkeeper Mitryushkin became a player of Fortune
Source https://edition.cnn.com/2020/09/18/us/tennessee-shooting-carjacking-rampage-trnd/index.html?utm_source=feedburner&utm_medium=feed&utm_campaign=Feed%3A+rss%2Fcnn_latest+%28RSS%3A+CNN+-+Most+Recent%29

The Memo: Florida and Pennsylvania hold keys to victory

Lessons From the 2000 Election

Help! I Think My Girlfriend Is Making Up Her Sensitivity to Smell.

Man accused of planning sexual assault at River North hotel so he could sue has a history of falsely claiming he’s paraplegic in lawsuits, prosecutors say

My Boyfriend Says I’m Turning Into My ‘Drama Queen’ Mom. Is This My Destiny?

What Could Have Kept Me Out of Prison

What 2,392 Incarcerated People Think About #DefundThePolice

HSBC plans to speed up restructuring as profits drop 36%

Burgundy and Gold grab bag: Dallas, was it just a dream?

There Is Nothing Left to Say. It’s Just Time to Vote.

Is cash in danger of extinction?

Coronavirus deaths are rising again in the U.S., as feared

‘Fat and Happy’ With a Conservative Court, Are Republicans Losing a Winning Issue?