Now that the Air Force has officially announced that it has built and flown a new sixth-generation fighter jet, many might wonder: Could it be the stealthiest, fastest and most lethal aircraft ever to exist? What if it were built to be as stealthy as a B-21 bomber?

A new generation stealth fighter, to come after the F-35, was not expected until possibly 2030, yet Air Force Acquisition Executive William Roper has announced the services have "flown" a 6th Gen aircraft, a platform referred to by the Air Force as Next Generation Air Dominance.

Granted, very little is known about what the actual design may look like, or which vendor built it, yet Boeing, Northrop Grumman and Lockheed have all been working on early sixth-generation fighters to some extent. While no vendors have announced any details about an actual plane, some have each released images, or renderings of what their offerings might look like. All the images look stealthier than anything that has ever been seen. Despite these available image renderings, and Air Force comments that some subsystem component prototyping has been underway, virtually nothing is known about the industry offerings, or which vendor produced the prototype that flew. (Air Force officials first broke the news to Defense News before repeating it at the 2020 Air Force Association Conference)

One thing that first meets the eye is that the stealth configuration of those Northrop and Lockheed images that are available show virtually no vertical structures. In recent years, Northrop showed what looked like a 6th Gen aircraft in a Superbowl commercial. Lockheed’s picture shows a horizontal blended wing-body that looks flatter and more horizontal than anything ever seen. It also has no end tails or protruding “fins” anywhere. This is significant because vertical structures, of any kind, present configurations and contours potentially more susceptible to being identified by return radar “pings” received by enemy air defenses. 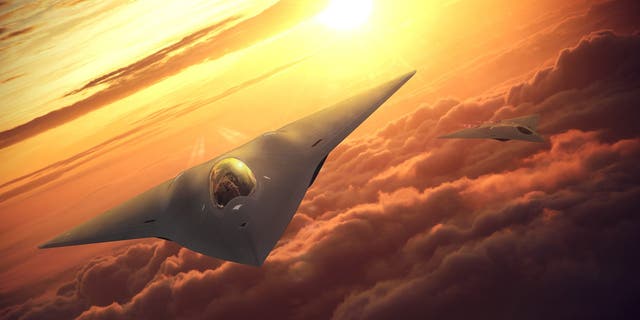 The engine inlets on the available Lockheed picture are elongated, aligned with the shape of the fuselage, underneath the wings and simply more blended than anything that has existed to date. This suggests new ways to manage the incoming airflow that is then to be compressed, combined with fuel and ignited to generate engine thrust. Also, the Lockheed image shows “underneath” engine inlets, as opposed to the B-2 and B-21 that have inlets on top of the fuselage. Underneath, blended air ducts could also represent an effort to manage the heat and potentially detectable airflow activity generating turbulence or high temperatures.

The rendering looks like a dual-engine, yet the engines themselves appear as tiny “humps,” even more blended than a B-2 bomber. Interestingly, the dual-engine back half structures both look different, yet somewhat analogous to an F-22 with a smooth, curvy fuselage. It seems quite likely a 6th Gen would have even more advanced supercruise ability to reach extreme speeds without needing afterburner, enabling longer dwell time and expanded operational possibilities such as dynamic maneuverability. These are the reasons why the F-22 is considered to be the best air-to-air platform ever to exist. Could a new NGAD fighter bring this to another breakthrough level of air dominance and global superiority? Virtually nothing is actually known, but it sure seems possible.

A sixth-generation aircraft is almost certain to be much faster and more maneuverable than a bomber, one could almost say the fuselage looks somewhat similar to a B-2 or B-21 bomber, given the complete absence of vertical structures.

This is extremely significant, as bombers are by design built to be entirely undetectable to both high-frequency engagement radar as well as lower-frequency surveillance radar. Surveillance radar often stops short of being able to closely track, target or “engage” an aircraft, it can often determine if something of relevance is simply in the area.

The B-2 and B-21, however, are built to elude surveillance as well as engagement radar to conduct attack missions without an enemy knowing it is even there. Given its ability to remain entirely undetectable, B-2 and B-21 bombers are not built to dogfight or maneuver at massive speeds but rather engineered as stealthy, high-altitude bombers able to deliver attacks without being detected at all.

Accordingly, the absence of vertical structures is a large reason why stealth bombers are the stealthiest platforms in existence. This raises an interesting question. Could a super high-speed, maneuverable, multi-role fighter be built to be just as stealthy as a bomber? That would be a massive development.

Taking this concept a little further, it is well established that stealth fighter jets with some protruding vertical structures, while still able to avoid engagement radar, may be slightly detectable to surveillance radar. In short, an enemy might be able to detect that a stealth fighter is “there,” but not be able to target it in any way.

Actual targeting requires a narrow, extremely high-frequency radar signal able to track small movements and generate a more thorough rendering of an aircraft. Essentially, while it is extremely unlikely that even the most advanced engagement radar would be able to engage a fifth-generation fighter jet, it might be possible that some stealthy aircraft could, in some cases, be slightly “detectable” to surveillance radar to some degree, depending upon the efficacy of an enemy’s air defense system.

This is why F-22 and F-35 fighters are built with high-speed maneuverability and advanced air-to-air weapons, as they can dogfight to survive if need be. Finally, none of this means the F-35 is going anywhere soon, as it may indeed be impervious to all kinds of radar. Its actual performance data is likely not available for obvious security reasons. The Pentagon has been working on an elaborate upgrade process for the F-35 and plans to capitalize upon its technologies for years. In fact, the Air Force plans to fly the F-35 until 2070 or beyond, and it is widely believed that its tactical and technical superiority is here to stay.

Kris Osborn is the Managing Editor of Warrior Maven and The Defense Editor of The National Interest.

Hans-Dieter flick: I Hope Alaba will sign a contract with Bayern. Our club is one of the best in the world
Diego Maradona: Messi gave Barca everything, brought them to the top. He was not treated the way he deserved
Federico Chiesa: I hope to leave my mark in Juve. We will achieve great results
The Coach Of Benfica: I don't want us to look like the current Barcelona, it has nothing
Guardiola on returning to Barca: I'm happy at Manchester City. I hope to stay here
Fabinho will not play with West ham due to injury
Ronald Koeman: Maradona was the best in his time. Now the best Messi
Source https://www.foxnews.com/tech/6th-gen-takes-to-the-air-the-fastest-stealthiest-most-lethal-aircraft-ever

Here's how stores are changing Black Friday for the pandemic

Indian astrologer predicts Donald Trump's victory in US elections, but with a twist

What surge of early voters tells us about 2020

As cold settles in Northeast, Halloween forecast for much of country looks pleasant

Ex-Rep. Gabrielle Giffords: Elect Biden president — he has compassion, toughness and energy to unite us

Dr. Fauci’s restaurant-owning cousin wishes he would ease up on lockdowns

One year later, families of Americans massacred by Mexican cartel say next to nothing has changed

Democrats take one last swing at state legislatures before 2021 redistricting

Democrats hold turnout edge in Florida, with Republicans nipping at their heels

How these top chefs are riding out the pandemic

It's the Saturday before Election Day

New York's Strand bookstores received 25,000 orders in one weekend after asking for help

A 20-year-old woman cast her ballot early before dying of cancer. Her state will throw it out.

NYC therapists brace for stress and anxiety amid election madness

Celebrities voting for the first time in the 2020 presidential election

Who the Electoral College really benefits

Home of the Week: A brand new build in Hermosa Beach

'I definitely feel like a minority': Beverly Hills is an unlikely outpost for Trump supporters

These two Californians think they're close to changing the electoral college

Will the pandemic turn our favorite old-time L.A. shops and restaurants into memories, or can we do more together to save them?

Help! I Dumped My Ex-Boyfriend Four Years Ago. He’s Still Living With Me.

Bill Maher: ‘Let’s Not Have a Civil War With the Trumpers’ After the Election

Vietnam Gets Boost from Western Allies in its Defense against China

Huge crowd joins LGBT march in Taiwan, where COVID is at bay

This artist wants you to Google "the next American President"

In Nashville the reasons vary, the candidate of choice doesn't

Brash and Pugnacious, Trump Has Presided Over a Tumultuous Presidency

A Longtime Fixture in US Politics, Biden Seeks To Win Elusive Prize

The presidential election comes down to these 12 states

'Black Lives Matter' lesson divides small town in Wisconsin, but some hope this is a teachable moment

'If my father does something for me, is that nepotism': Salman Khan lambasts Rahul Vaidya [Watch]

Inks And Colors Rescue 'Blue In Green' From Plodding Plotting

Lawyers say deportees to Cameroon would be flying on 'death planes'

Michael Levin: Daylight Saving Time – Finally, there's one good thing you can say about it

I’d Celebrate Two Black Senators in South Carolina. But I’d Worry About What Comes Next.

With Deluge Of Mail Ballots, Here's When To Expect Election Results In 6 Key States

How Humans Domesticated Themselves

The push to get Haitians to “Hexit” from Democrats

NYX's Chilling Adventures of Sabrina Makeup Collection Is Back Today Only!