It was a week into the Bobcat fire and 300-foot flames were lapping at the historic Mt. Wilson Observatory.

This was the moment firefighters and observatory officials had been fearing: the fire striking a direct blow to the complex. Glowing red embers chewed through brush and trees, and thick smoke billowed into dark skies typically reserved for stargazing.

“It was gaining a flame-front we couldn’t manage,” said Oscar Vargas, division chief for the Angeles National Forest. “One that could destroy the observatory.”

Vargas described an infernal scene of smoke and heat as he and more than 100 firefighters moved into position atop the hill to try to save the famed site.

“It was intense,” he said. “We’d have to hold the lines when we could, back out when it was too hot, then jump back in with hoses and helicopters to mop the flames down and prevent the loss of structures.”

The Bobcat fire’s path of destruction began Sept. 6. It quickly overtook a vast swath of the Angeles National Forest, charring hundreds of thousands of acres near the foothill neighborhoods of the San Gabriel Valley and spreading all the way to the desert communities of the Antelope Valley, where dozens of structures have been damaged or destroyed.

But among the biggest worries of the blaze — now one of the largest in Los Angeles County history — has been Mt. Wilson, which repeatedly has come under threat from the fire. 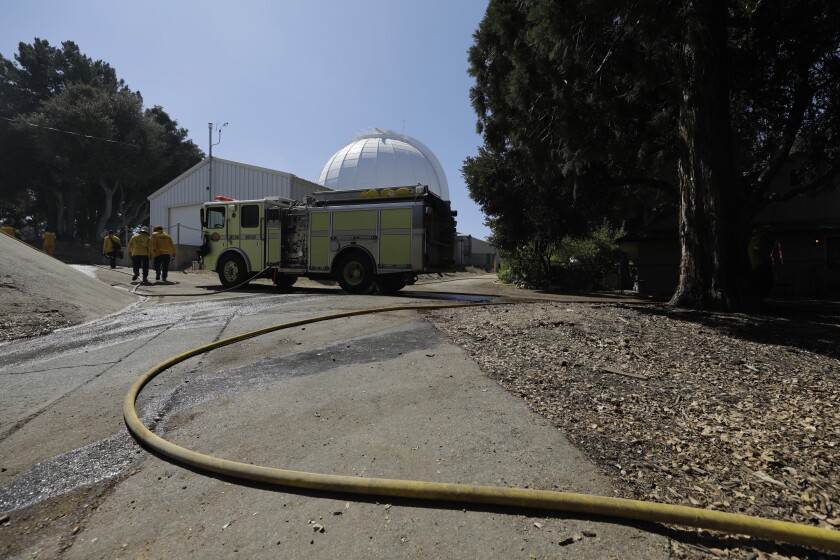 Fire equipment is deployed at the historic Mt. Wilson Observatory, where nearby transmission towers have been threatened by the Bobcat fire.

Considered one of the cradles of astronomy, the observatory was founded in 1904 by George Ellery Hale. When the 100-inch Hooker telescope gathered its first light on Nov. 1, 1917, it overtook its 60-inch neighbor and became the largest telescope in the world — a position it held for more than three decades.

On the night of Sept. 15, flames came within just 5 feet of the storied structure.

“It sounded like a train, or a jet engine,” Vargas said of the aggressive blaze. “The way the fire was spreading through the trees and all the brush — it was like an intense sizzling, cracking and popping.”

The battle would last for the better part of a week, during which time smoke from the fire cast an ominous pall across much of Los Angeles County and contributed to air quality so poor that people were advised to stay inside with their doors and windows shut.

“Our stuff is priceless, it’s irreplaceable,” Meneghini said. “There’s no monetary value you could put on these items.”

It was not the first time the observatory had come under threat from wildfires. In 2009, the fight against the sprawling Station fire lasted five days and four nights, but ultimately the buildings perched atop the 5,710-foot mountain were saved.

The most recent battle serves as another reminder of how much is at stake there.

And that preparation helped pave the way for a chance at victory. A week later, the once-roaring hillside was quiet, and the observatory had emerged unscathed.

Vargas credited tireless fire crews and a decade’s worth of fuel-reduction work — including the removal of hazardous dry brush and vegetation from the surrounding forest — in helping prevent destruction.

“The work we’ve done in the last 10 years paid off big time,” he said. “We had done several hundred acres of fuel treatment, so that helped defend and save Mt. Wilson.”

Mother Nature also offered an assist, as temperatures cooled slightly after the initial firefight, the humidity increased and winds died down.

“The weather finally cooperated,” Gillotte said, standing atop the now-smoldering hillside. “We were finally able to see the fire and to get to the fire.”

Meneghini said the observatory’s structures suffered little damage, save for a bit of scorched wiring.

“I actually got to sleep at a decent hour last night,” he said Thursday, a day after crews turned a corner on the evasive blaze.

A lingering smell of smoke and thousands of feet of hose lines snaking across the property are among the remnants of the battle.

And while the fire’s containment numbers continue to increase, the rugged landscape atop Mt. Wilson will be marked by the Bobcat fire for some time: Bright pink fire retardant dropped by aerial crews now paints a technicolor dreamscape across rocks, roadways and burned trees. 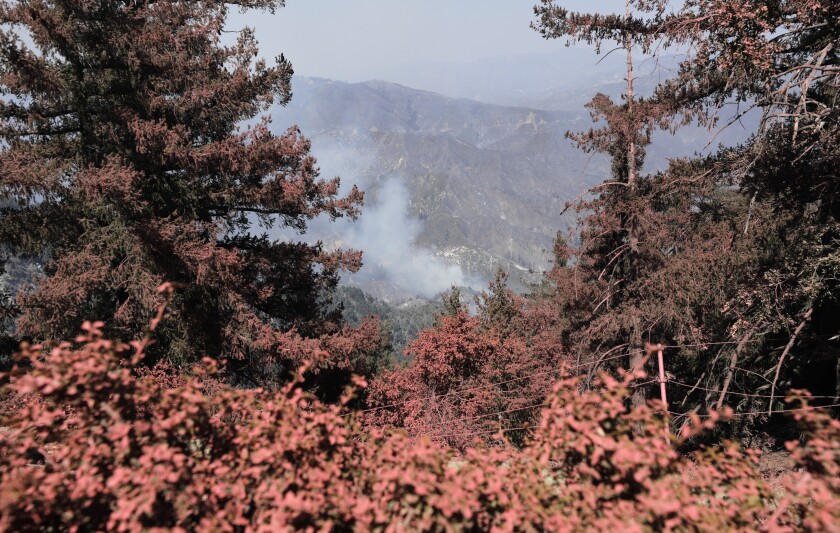 Brush burns in the distance as seen from the Mt. Wilson Observatory, framed by vegetation covered in pink fire retardant.

But fire crews aren’t out of the woods yet. About five miles below the observatory, at Highway 2 and Mt. Wilson Red Box Road, thick smoke settled in midweek like a blanket over the valley.

“There are still a lot of variables at play,” said L.A. County Fire Department spokesman Pono CQ Barnes, who was stationed at the intersection. “Right now, we’re looking at wind, fuels and topographical features.”

Although progress on the blaze — which is more than 50% contained — has been substantial, Barnes said, if the wind changes, there is “significant potential” for reignition.

With roads still closed to visitors, the world inside the national forest alternates between the peaceful silence of nature and the vibrating whir of helicopters, still dropping water and retardant into the smoky brush below.

There are other reminders of the fire’s wrath: Entire hillsides dotted with once-great pines now stand like blackened toothpicks, a symbol of what has become the worst wildfire season in California history.

Yellow hardhats bobbed up and down as firefighters cleared their way, one step at a time, through thick vegetation, looking small under the vast expanse of sky as they continued to secure the forest.

But Mt. Wilson is safe — at least for now.

Increasing selfishness and greed is the last thing the world needs right now. UEFA Vice-President on the European super League
Juve responded to Barca Pro 🐐 : We will bring you a real one at the camp Nou
Lampard thinks Messi is better than Ronaldo: I Choose Lionel because of pure, natural talent
He really wanted to play football, but he knew that he would not become a professional. Then he wrote a book about his favorite game
Structurally, Juve and Barcelona are very similar. Koeman won the case, and Pirlo smartly explained the tactics after the match
Alex telles has contracted the coronavirus
Dietmar Hamann: Manchester City have reached the ceiling under Guardiola. He is still in charge thanks to his achievements at Barca
Source https://www.latimes.com/california/story/2020-09-26/the-battle-to-save-mt-wilson-from-the-bobcat-fire

Polling Places Are Closing Due To COVID-19, It Could Tip Races In 1 Swing State