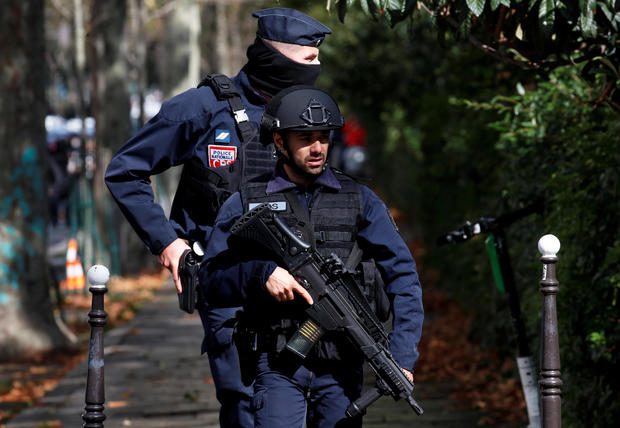 Police are seen at the scene of an incident near the former offices of French magazine Charlie Hebdo, in Paris, France, September 25, 2020. GONZALO FUENTES/REUTERS

Paris — Police in the French capital arrested one man after a stabbing attack outside the former offices of the satirical newspaper Charlie Hebdo on Friday. The Paris Police later confirmed there were no other suspects being sought.

French Prime Minister Jean Castex confirmed that the attack had taken place, and police said two people were wounded, both left in serious but not life-threatening condition. Both victims were believed to be employees of a video production company that uses the office building.

Elite police intervention units were on at the scene and a security cordon was quickly put up around the area. Police said a possible suspicious package found at the site turned out to be innocuous.

The building in the eastern 11th district of Paris was the scene of the deadly January 2015 attack carried out by brothers Saïd and Chérif Kouachi, who entered the offices on January 7 and killed 11 people, including eight Charlie Hebdo editorial staffers.

As they fled the scene, the brothers killed a policeman who had been posted on guard outside the newspaper's offices, after it received numerous threats.

Those threats related to Charlie Hebdo's publication of cartoons depicting the Prophet Muhammad. Muslims believe his likeness should not displayed or published, and millions around the world took offense. 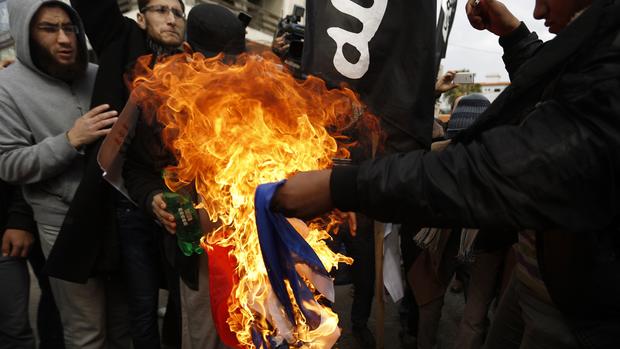 Protests break out around the world against Charlie Hebdo

The two brothers were later shot dead by police.

A trial for that attack opened in Paris on September 2. The newspaper marked the occasion by republishing some of the cartoons of the Islamic prophet. Al Qaeda recently renewed its calls for attacks targeting the newspaper, which now operates out of a secret, heavily-guarded location.

This is a breaking news story. Please refresh your browser for updates.

Hans-Dieter flick: I Hope Alaba will sign a contract with Bayern. Our club is one of the best in the world
Diego Maradona: Messi gave Barca everything, brought them to the top. He was not treated the way he deserved
Federico Chiesa: I hope to leave my mark in Juve. We will achieve great results
The Coach Of Benfica: I don't want us to look like the current Barcelona, it has nothing
Guardiola on returning to Barca: I'm happy at Manchester City. I hope to stay here
Fabinho will not play with West ham due to injury
Ronald Koeman: Maradona was the best in his time. Now the best Messi
Source https://www.cbsnews.com/news/paris-stabbing-attack-reported-near-former-charlie-hebdo-office-today-2020-09-25/

“We got our young man back”: A rescue in Nigeria gives Trump a late foreign policy win

McCall, Heiligh lead No. 20 Chants to rout of Georgia State

USC Pulls Video Depicting Players At Hollywood Premiere, Admits “We Can Do Better”

Brits rely on flower power to get them through coronavirus winter

Bill Belichick acknowledges why Patriots are in such a messy spot

Patriots CB Stephon Gilmore ruled out for game against Bills

Sub-$2 gas: Coming to a gas station near you

Their First Try Backfired, but Giuliani and Allies Keep Aiming at Biden

Guardian Angels gear up to patrol NYC in wake of election: ‘Fear is growing’

Sean Connery showed us the way things ought to be done

The ‘Wall’ Is Still Motivating Voters. But This Time is it Against Trump?

Will.i.am Says It’s An “Insult” For Donald Trump To Compare His Work For The Black Community To That Of Abraham Lincoln

Doop! Union emerge out of Philadelphia as best in MLS