Archaeologists have identified the wreck of a 19th-century slave ship off Mexico’s Yucatan peninsula.

The ship is the first from the Maya slave trade to be discovered, archaeologists say.

The shipwreck was found in 2017 about two nautical miles off Sisal, Yucatan, according to Mexico’s National Institute of Anthropology and History (INAH). After three years of research in Mexico, Cuba, and Spain, the ship has been identified as the 19th-century steamer “La Union.”

“Between 1855 and 1861, it carried to Cuba a monthly average of 25 and 30 Mayans, captured in war or deceived with false documents,” explained INAH in a statement. 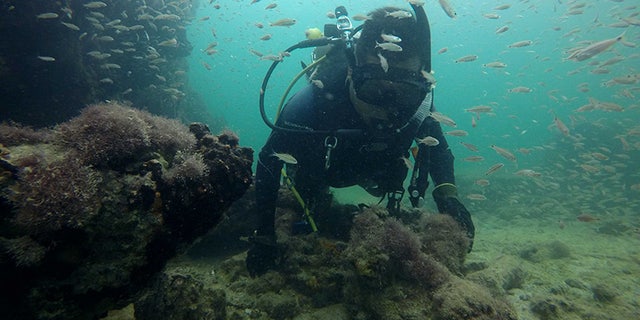 A diver explores the wreck. (Photo by Helena Barba./INAH)

Mexico abolished slavery in 1829, although the practice continued decades afterward. “Despite the fact that on May 6, 1861, President Benito Juarez issued a statement to prevent the forced extraction of any Mayan individual, the fire that in September 19 of that same year caused the sinking of the steamer on its way to Cuba, shows that slavery continued without obeying any law,” said INAH.

The Maya were enslaved during the Yucatan Caste War, which lasted from 1847 to 1901. “A strategy that Hispanic and Mexican oligarchs used since 1848 was to order the expulsion of those Mayans captured in combat, so many were sent to Cuba," said INAH, noting a workforce shortage on Cuban sugar cane plantations. “Each slave was sold for up to 25 pesos to intermediaries, and they could be resold in Havana for up to 160 pesos for men and 120 pesos for women.” 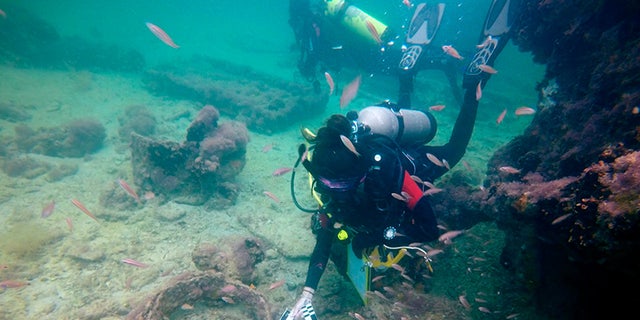 The wreck was discovered in 2017. (Photo by Helena Barba/INAH)

Some Maya who had lost their property in the war were also given false papers indicating that they would become settlers in Cuba, only to become enslaved.

“La Union” belonged to the Spanish firm Zangroniz Hermanos y Compañía, which was established in Havana in 1854. The following year it was authorized to trade in Mexico. “A year before its sinking, in October 1860, the steamer had been surprised in Campeche carrying 29 Mayans, among them boys and girls ages 7 and 10, but the public derision was not enough to put an end to the smuggling carried out by ‘La Unión’,” said INAH.

HUGE MAYA MONUMENT IN MEXICO IS THE LARGEST AND OLDEST EVER DISCOVERED, ARCHAEOLOGISTS REVEAL

When “La Union” sank half of her 80 crew members and 60 passengers lost their lives. These figures, however, do not include Maya slaves transported on the ship, who were considered merchandise.

In the aftermath of the sinking “the Mexican government paid more attention to searches in ports, in order to prevent the trafficking of people on the routes to Cuba,” INAH said.

Another Zangroniz Hermanos y Compañía steamer, “Mexico,” was also involved in the slave trade, according to INAH.

Mexico continues to reveal new aspects of its history. Earlier this year, an elaborate 2,000-year-old "volcano map" was discovered carved into a large volcanic rock in Colima.

Klopp Pro 2:1 with Sheffield: Wins 2:0 or 3:0 come when you fight fiercely in games like this
Messi repeated his worst streak - 6 games without goals to Real Madrid
Schalke are 21 consecutive games unbeaten in the Bundesliga and are in penultimate place
Ronaldo - Khabib: Congratulations, bro. Your father is proud of you 🙏
Suarez shares 1st place in The La Liga goalscoring race with Fati and Paco, scoring 5 (4+1) points in 5 games
Real Madrid beat Barcelona by wins in full-time official matches-97 vs 96
Lampard on the episode with Maguire and Aspilicueta: a Clean penalty in favor of Chelsea
Source https://www.foxnews.com/science/19th-century-maya-slave-ship-wreck-discovered-mexico

Unsure How to Select Artwork? An Expert Weighs in With Some Tips