In 2019, Lorenzo Liberti met a homeless veteran while serving meals at a food pantry with his church youth group.

The tenth grader from Lakewood Ranch, Florida, couldn't understand how someone who had served the country ended up abandoned, he says.

"He inspired me to be the change and make a difference," Lorenzo says.

Lorenzo's father wanted him to be productive over the summer, "so I started tinkering with wood," he says. 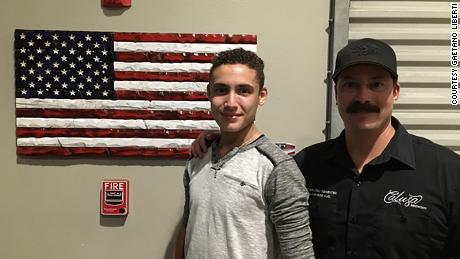 A Navy Seal Veteran who owns Calusa Brewery, son of the auction winner from the "Be The Key" Gala, with Lorenzo and his flag

After Lorenzo finished his first flag, people in his community wanted their own. So, he began selling his "Heroic Flags" to raise money for "forgotten heroes."

Lorenzo has made about 60 flags since he started in November. Each flag takes about 15 to 20 hours to make. That's over 1,000 hours of work he has spent carving and painting.

Lorenzo's mother is a healthcare worker in the Sarasota Memorial Hospital network. When the pandemic first rocked the nation, he saw "the dedication (first responders) have to the communities," and decided to include them in his mission, he says.

"We went to war against the virus. Our new soldiers are wearing scrubs instead of camouflage," he says. "I thought it would be fitting to honor our new heroes with my flags."

With this new direction, Heroic Flags has gained a lot of local and national attention. The website sold out of flags within 45 minutes of appearing on Fox and Friends.

"I have a long waiting list of people still wanting flags," Lorenzo says.

Lorenzo wants to raise $50,000 to make flags for the hospitals most impacted by Covid-19 in each state, and has raised $13,641 so far. The net proceeds will go towards homeless veterans, "as their needs have not diminished during the pandemic," he says on his GoFundMe.

His ultimate goal is to get a heroic flag in every house in America, including the White House, he says.

Jose Mourinho: what happened to Dyer is not normal, he was dehydrated. If the League management doesn't care about the players, I don't
Jose went berserk twice during the match with Chelsea: ran over Lampard and ran to look for Dyer - he rushed to the toilet right during the game
Lampard on relegation from the League Cup: we Need to keep a positive attitude. Everything will come if Chelsea score second, leading the score
Call of nature, what can you do? Dyer explained why he ran to the dressing room during the match with Chelsea
Mourinho and Lampard shook hands before the penalty shootout. In the first half, they had a fight
Dest arrived in Spain to complete a transfer to Barca
Lionel Messi: I Am responsible for my mistakes. I wanted Barcelona to become stronger
Source https://edition.cnn.com/2020/08/12/us/heroic-flags-trnd/index.html?utm_source=feedburner&utm_medium=feed&utm_campaign=Feed%3A+rss%2Fcnn_latest+%28RSS%3A+CNN+-+Most+Recent%29

President Trump Has Attacked Critical Race Theory. Here’s What to Know About the Intellectual Movement

Trump tried to steamroll Biden and the moderator. The Democrat's response: 'Will you shut up, man?' Here are the highlights

Two angry words Jets’ defense must play with vs. Broncos

When is the next 2020 debate? The vice presidential debate is on October 7.

Key takeaways from the first presidential debate between Trump and Biden

At debate, Trump talks over Biden, who fires back ‘would you shut up, man?’

Debate Takeaways: An acrid tone from the opening minute

Biden levels Trump on race: 'This man cares at all? This man's done virtually nothing!'

Biden, Trump spar over COVID death counts: 'You would have lost far more'

Biden To Trump: ‘You’re the Worst President America Has Ever Had’

Biden to Trump: “Will you shut up, man?”

Biden hits Trump on health care: ‘He has no plan’

COVID-19 Cases Are Rising Among U.S. Children as Schools Reopen

Trump and Biden Repeatedly Clash During First Presidential Debate: ‘Will You Shut up Man?’

Trump says murders are up in Democrat-run cities. They’re up in Republican-run cities, too.

Helen Reddy Dies: ‘I Am Woman’ Hitmaker & Feminist Icon Was 78

Helen Reddy, Singer Behind ‘I Am Woman,’ Dies at 78

Joe Biden Tears Into Donald Trump For Debate Interruptions: 'Will You Shut Up, Man?'

Biden pushes back against ties to Bernie Sanders during first debate: 'I am the Democratic party'

'Will you shut up, man?': Biden cuts through Trump's bananas interrupting

Trump to Biden: ‘There’s nothing smart about you, Joe’

Trump To Biden on SCOTUS Nominee: POTUS Is Elected for Four Years, Not Three Years

Biden calls Trump a 'liar' and a 'clown' at first debate

Azerbaijan and Armenia Brush Off the Suggestion of Peace Talks

What kind of moderator will Fox’s Chris Wallace be?

Trump tangles with Wallace: 'I guess I'm debating you'