According to the CPB, the shipment originated in Xinjiang, China, signaling potential human rights abuses of forced labor and imprisonment. The products were worth over $800,000 dollars.
Xinjiang is an autonomous rural region in the northwest of China and home to roughly 11 million Uyghurs, a predominantly Muslim ethnic minority with a distinct culture and language. Until recently, there were many more Uyghurs in Xinjiang than Han Chinese, the ethnic majority that makes up the rest of the country.

The US State Department estimates that over one million Uyghurs have been detained in a massive network of internment camps in Xinjiang, where they are reportedly "subjected to torture, cruel and inhumane treatment such as physical and sexual abuse, forced labor, and death."

In addition to political indoctrination, former detainees have told CNN that they experienced sleep deprivation, lack of food, and forced injections.
This is the second time this year that the CBP has seizedproducts from China suspected to have been made from prisoner's hair.
"It is absolutely essential that American importers ensure that the integrity of their supply chain meets the humane and ethical standards expected by the American government and by American consumers," said Brenda Smith, Executive Assistant Commissioner of the CBP Office of Trade.

"The production of these goods constitutes a very serious human rights violation, and the detention order is intended to send a clear and direct message to all entities seeking to do business with the United States that illicit and inhumane practices will not be tolerated in U.S. supply chains." 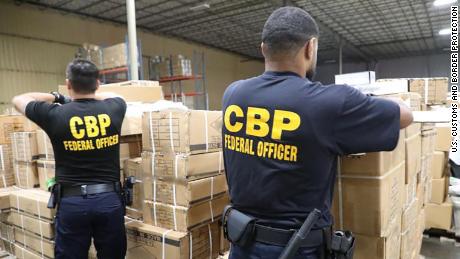 China has faced international scrutiny for its treatment of the Uyghurs, and in June, President Trump signed a bill into law that aimed to punish Beijing for its repression of the ethnic minority.
However, according to John Bolton's new book "The Room Where It Happens", Trump told Chinese President Xi Jinping in 2019 that he should "go ahead with building the camps." Per Bolton's account, Trump thought that was "exactly the right thing to do."

Sancho has agreed a 5-year contract with Manchester United. The clubs are at an advanced stage of negotiations
Willian is in talks with Arsenal. He refused to sign a 2-year contract with Chelsea
Antonio Conte, Denying what was asked of the players See about the future of Surrey. I have a contract with Inter for 3 years
Lampard wants Chelsea to buy Chilwell, a new goalkeeper and at least one Central defender
Barcelona wants to increase Fati's compensation to 400 million euros
Inter agreed with Manchester United to transfer Sanchez for 15 million euros. It will be announced after the match with Getafe
Alisson: Klopp is a passionate guy, he wants to win and make Liverpool even greater
Source https://edition.cnn.com/2020/07/02/us/china-hair-uyghur-cpb-trnd/index.html?utm_source=feedburner&utm_medium=feed&utm_campaign=Feed%3A+rss%2Fcnn_latest+%28RSS%3A+CNN+-+Most+Recent%29

Dwayne 'The Rock' Johnson and partners buy XFL for $15 million

This best-selling facial cleanser is great for dry skin

Stream It Or Skip It: ‘Connected’ On Netflix, A Docuseries That Examines How Everything On Earth Is Connected To Everything Else

9 baby koalas will melt your heart

19 shot, one fatally, in bloody Sunday across NYC

Rhea Chakraborty's advocate: She is not absconding, no notice or summons has been received by her

The $349 Pixel 4a shines with a sharp display, smooth performance and an impressive camera

Diego is the Best Part of Netflix’s ‘Umbrella Academy’

Another hedge fund is sweeping up newspapers. This time, journalists are cautiously optimistic

Explained: Can Sushant's therapist be charged for breaching patient's confidentiality

Georgia teen loses both parents to COVID-19 within four days

Florida fisherman bitten by shark after previously getting bitten by gator

White House explores Trump acting on his own on virus relief

Twitter is sounding off about who should replace Ellen DeGeneres

‘Moesha’ on Netflix Dominates Twitter: “I Literally Stayed Up All Night Watching”

The 15 best back-to-school deals to snag before fall

Israeli army says it thwarted attack by militants from Syria