At least one person was killed and more than two million customers were without power after Tropical Storm Isaias swept into New York, New Jersey and Connecticut on Tuesday, battering the Northeast with heavy rain, tornadoes and nearly hurricane-force winds.

The strong winds snapped branches and felled trees across the region, causing at least one death.

A 60-year-old man who was sitting on the passenger side of a car on 84th Drive in Queens was killed when a tree fell on the vehicle around 12:40 p.m., the police said.

About an hour and a half later, a 49-year-old woman was critically injured when she was struck by a falling tree branch on Dumont Avenue in the Brownsville section of Brooklyn, the police said.

It was not immediately clear how long the outages would last, but Gov. Philip D. Murphy of New Jersey said that it could be some time in his state.

“Some of these outages may last for a few days due to the severity of the storm,” Mr. Murphy wrote on Twitter at around 4 p.m. “We are working closely with the utilities to restore power as quickly and safely as possible.”

The storm, which made landfall in North Carolina as a hurricane, moved swiftly up the East Coast. In the Carolinas, Virginia and other coastal states, there were reports of damaged buildings, power outages and downed trees.

At least two people were killed after a tornado touched down in Bertie County, N.C., and caused significant damage to a neighborhood there.

By 3 p.m., high winds were already causing mayhem in and around New York City, with the National Weather Service expecting “damaging winds” and the threat of tornadoes to continue through the afternoon. 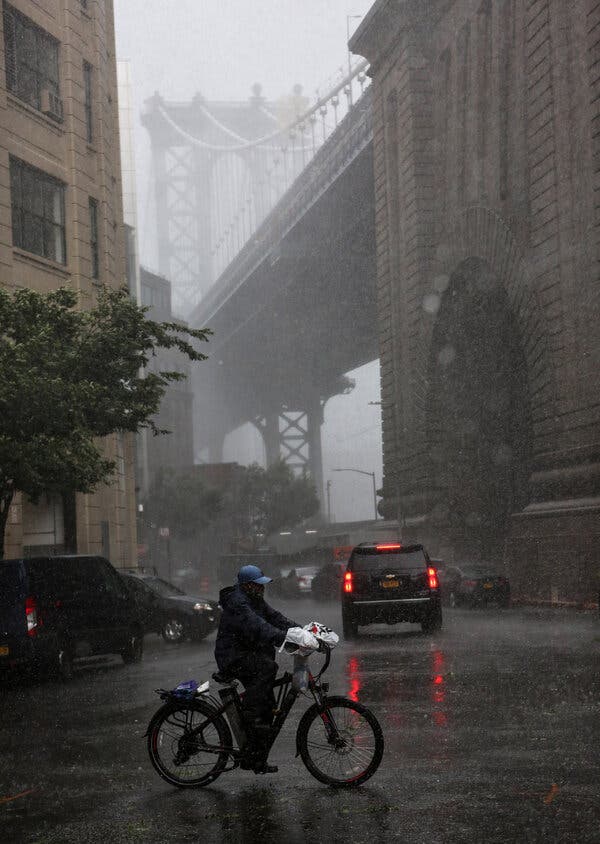 High winds and rain caused mayhem in and around New York City, as seen on the Brooklyn side under the Brooklyn Bridge. Credit...Earl Wilson/The New York Times

Branches from trees lining neighborhood streets snapped and fell onto cars. Near Washington Square Park in Manhattan, a tree crashed into a parked van. A mile away, in Gramercy Park, entire trees were toppled, with one splitting in half.

Arlene Harrison, the president of the Gramercy Block Association, said she was thankful that no one had been hurt.

“Trees are replaceable,” she said.

Amando Flores, who has been Gramercy Park’s caretaker for 25 years and who was working in the park on Tuesday afternoon, said he saw one of his favorite trees, a magnolia that he helped plant nearly two decades ago, uproot and collapse.

“It was a sad day for Gramercy Park,” Mr. Flores said.

On Tuesday afternoon, the Metropolitan Transportation Authority said some aboveground subway service, the Metro-North Railroad, Long Island Rail Road and the Staten Island Ferry had been suspended temporarily. At least 55 flights were canceled at Kennedy International Airport and at least 78 were canceled at La Guardia Airport.

The Verrazzano-Narrows Bridge was temporarily closed to traffic in both directions. At a briefing on Tuesday afternoon, Sarah Feinberg, the transit authority’s interim president, said she could not say when full subway service would resume.

“As soon as the trees and debris are removed, we’ll obviously be back to full service,” she said. “Which may take some time given the number of trees and branches that are down and fences and other debris.”

The rains brought by the storm had mostly passed through the city by late afternoon, but the stiff winds continued, creating an odd juxtaposition with the suddenly sunny skies.

Patrick O’Hara, a Weather Service meteorologist, said the agency was tracking reports of at least two tornadoes on Tuesday: one in Strathmere, in South Jersey, where heavy damage was not immediately reported; and another near Dover, Del.

Photos and videos posted on social media showed trees snapped and pieces of buildings blown on top of vehicles in Dover.

Mr. O’Hara said that his office, which covers most of New Jersey, had received multiple reports of street flooding and trees blocking roads. Heavy rains had also caused flash flooding along creeks and roads in southeastern Pennsylvania, he said.

Strong winds, with gusts of more than 73 miles per hour, were possible into the evening along the New Jersey and Delaware coasts, according to the Weather Service. The rain was expected to taper off in the late afternoon.

On the Jersey Shore around 1 p.m., the beaches were nearly empty in the borough of Lavallette as winds whipped the air and white caps could be seen on the ocean waves. A few curious beachgoers made their way to the sand for a quick check on the incoming storm.

The power was out all across the barrier island on New Jersey’s coast, the borough said.

Before the storm hit, Gov. Andrew M. Cuomo of New York said in a statement on Tuesday that some inland areas in the state might get up to six inches of rain.

He said the state had deployed rescue teams, with boats and high-water vehicles, to the areas that could be hit hardest by the storm. The state had also distributed water pumps, chain saws, sandbags and bottled water.

The referee blew the final whistle, but after VAR awarded a penalty in favor of Manchester United. Bruno scored in the 99th minute after Brighton's goal in the 95th
Koeman on Suarez's departure: I'm not the villain in this movie. This is the club's decision
Maguire scored the 2nd goal for Manchester United in the Premier League and the first since February
Tonali passes poorly, fails in defense and loses the competition in Milan, and Pirlo calls him perfect and puts him above himself
Edouard Mendy: I am Chelsea's first African goalkeeper. It's a big responsibility
Marcelo will not play Betis due to back discomfort
We want to make sports shopping better. Become a part of our research focus group!
Source https://www.nytimes.com/2020/08/04/nyregion/nj-ny-Isaias-hurricane-storm.html

Kris Jenner confirms she will not be joining ‘RHOBH’

Moschino sends puppets down the runway for Milan Fashion Week

Why Silicon Valley CEOs are such raging psychopaths

Fire threat, heat wave in store for West this weekend as colder temps come to Midwest

What Keeps a Vaccine Expert Up at Night

10 classic books that keep getting banned

How do you go to the Los Angeles Public Library when COVID-19 has closed its buildings? It's easy, fun and surprisingly comforting

Work More Efficiently with Data When You Master Power Query

In leaders’ UN videos, the backgrounds tell stories, too

The biggest movies that have been delayed, and when you can expect to see them now

These retailers announced hundreds of store closures in September

It certainly hasn’t been easy for Giants’ Andrew Thomas

In Breonna Taylor's name: Devastation and a search for hope

State of the 2020 battlegrounds: Ohio, the unexpected swing state

Tasmania Whale Rescue Ends With 108 Saved and Over 300 Dead

In honor of National Yoga Month, save up to 96 percent on these at-home fitness services

A strange Pennsylvania ballot case fuels concerns about the DOJ

Home of the Week: Going top shelf in West Hollywood

Help! My Boyfriend’s Best Friend Is Urging Him Not to Marry Me.

Learn Google Ads and SEO Strategies to Grow Your Business

5 common coronavirus misconceptions and the science you need to know

'Good Trouble' bonus: Rep. Elijah Cummings on what we missed about John Lewis

Trump Says US Election Winner Might Not Be Known for Months

Abbreviated Pundit Roundup: As the electorate gels, Trump's problems come to a head

Republicans have signaled plans for a quick Supreme Court confirmation process. Here's when it could happen.

Why the right-wing has a massive advantage on Facebook

Damon Friedman: I nearly killed myself, but then saw God had a purpose for me. Get help if you are struggling